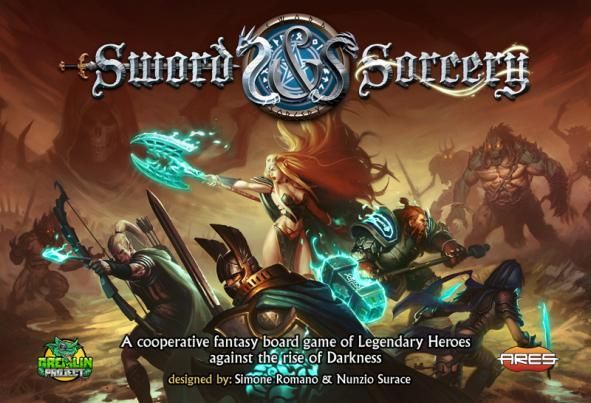 DESPITE UNDEAD MONSTERS BEING FEATURED ON THE BOX ART, NONE ARE IN THE BASE GAME.

Sword & Sorcery is the spiritual successor to Ares and Gremlin Project’s Galaxy Defenders, the 2014 fully cooperative campaign based sci-fi “dungeon crawler.”  The majority of Sword & Sorcery’s mechanics are a refinement of Galaxy Defenders’, including the red and blue D10’s with icons instead of numbers, enemy AI system, event deck, and more.  It simplifies the hex-based grids in Galaxy Defenders with interlocking tiles composed of larger areas, making it much easier to determine line-of-sight and enemy AI movement paths.  I know some people prefer the hex grid, but I found it too fiddly for my tastes to be constantly determining LOS and enemy pathing in Galaxy Defenders.  I appreciate how much easier it is to determine what an enemy will do on their turn and what player character they will target. 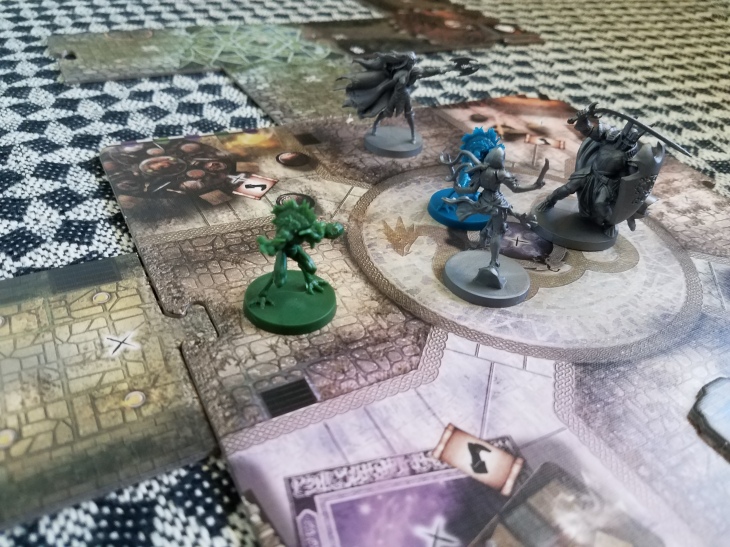 EXAMPLE OF A SCENARIO IN PROGRESS.

Players take on the roles of ancient heroes that were brought back to life, and are effectively immortal. The base game comes with 5 heroes, each of which can be played with their Law or Chaos soul alignment, so you have 10 different hero classes in the box.   As an example, Thorgar the dwarf can be played either as a lawful Cleric or chaotic Runemaster.  Some of Thorgar’s skills are shared across both these classes, but their base powers, stats, and a few skills will be unique to each of the two classes.  Each hero and Law/Chaos variant feels unique.

When a player character dies, rather than be eliminated from the game, they revert to their spirit form.  Spirit form heroes can perform special spirit actions on their turn unique to their character/alignment, and/or can resurrect at a shrine at the beginning of a round if players spend enough soul shards.  What this means is that as long as you don’t have a total party kill, you can keep resurrecting heroes and bringing them back into the fight.  The drawback to this is that every time you die, you lose a level.  When you are Level 1 in the game, this is a non-issue, but as you level up into progressively more expensive levels, losing a level can be very costly in terms of lost souls shards (XP).  Death effectively becomes a currency that players will have to manage, as sometimes it is worth it for a hero to sacrifice themselves.

Sword & Sorcery uses an enemy AI system similar to Galaxy Defenders for how enemies act.  Each enemy type in the game has their own unique AI script that determines what they will do based on their distance to the nearest hero.  Gremlins may run up and attack, raiders may want to keep their distance and shoot heroes, orc shamans may heal wounded enemies, etc.  Harder versions of enemy types don’t just hit harder, they also have additional abilities and logic included in their AI scripts.  Enemies react intelligently to the current board state, providing a challenge for players.  Players know how precisely how enemies are going to act on their turn as well, so they can use this information to their advantage as they plan out their turns, providing some tactical depth to the game.  Enemy AI orders are also very clear and easy to execute, there’s little ambiguity in what an enemy will do on their turn. 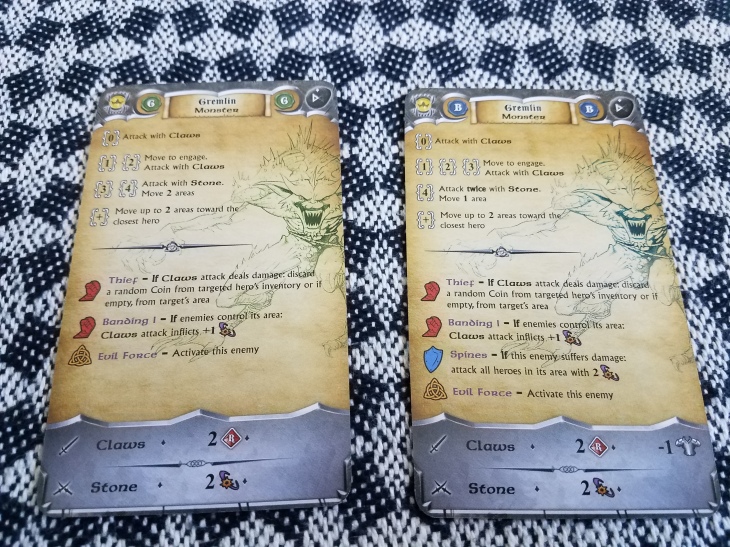 As I eluded to earlier, Sword & Sorcery isn’t a quick or streamlined game.  It’s a beast of a game to setup, play, and teardown.  You’re looking at easily a 3+ long game depending on player count.  The rulebook is massive at 56 pages long (here is a link to it if you dare give it a read).  There are half a dozen status conditions that work differently depending on whether a player or enemy has them.  Individual enemies have their own unique powers and defenses that you will need to keep track of.  Scenarios, events, and story passages can introduce additional effects and triggers that you’ll need to keep track of, such as reading a later story passage when a certain monster on the board is killed.  Story passages may require you to place out new tiles to expand the map, spawn specific enemies, seed cards into decks, etc.  As a solo player, I found it to be a bit of an information overload to keep track of.

Sword & Sorcery: Immortal Souls is the first act in larger campaign that spans multiple expansions: Darkness Falls is the second half of the main storyline, Arcane Portal is an optional side-campaign that can be played between the two acts, and Vastaryous’s Lair is an optional epilogue to the campaign.  I should point out for retail customers that Kickstarter backers received all this content last year when their pledges shipped in 2017 and Arcane Portal is available in retail markets, Darkness Falls hits retail next week on Oct 23, but there is no official announcement/confirmation of a retail release for Vastaryous’s Lair at this time. 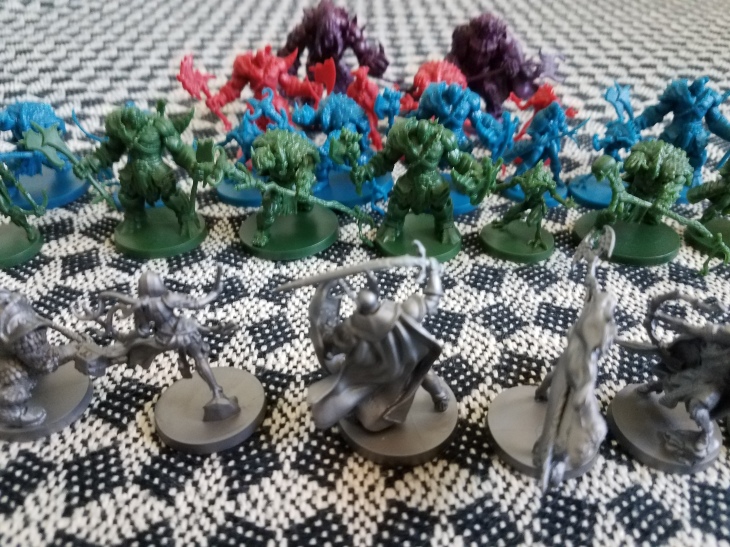 All-in-all, playing through the entire thing will take you across a 12-to-20 quest campaign (depending on what expansions you get), but Immortal Souls is only the first 6 quests.  The base game comes with 7 quests, with the storyline branching in one of two directions for the final quest depending on choices and actions you take in the first five quests of your campaign.  I was pleasantly surprised that it didn’t just boil down to whether you were playing Law or Chaos, and that smaller choices/actions I took in earlier quests caused a butterfly effect that led me to my ending (I ended up getting Quest VI for my final scenario).

I was less pleasantly surprised to see that at least in the base game and Arcane Portal, losing a scenario requires you replay it (either resetting back to the state your party was at the beginning of the scenario, or the state your party was in when you lost).  This can be frustrating if you lose 2-3 hours into a scenario near the end of it (and more often than not, if you’re going to lose, it’s going to be near the end).   I would have preferred if the game had a branching narrative for if you lost similar to games like SEAL Team Flix, or the story carried forward even if you lost like in Arkham Horror: The Card Game, or if the game provided some sort of checkpoint system through a scenario.  Better yet, I think a lot of these scenarios could have been broken into 2-3 smaller scenarios that were 60-90 minutes each with some minor tweaks.  In doing so, not only would have have made the game more accessible and losing more palatable, but they could have advertised having 2-3 times as many scenarios as they currently have!

The underlying story for Sword & Sorcery is pretty generic, and largely forgettable.  You’re brought back to life to stop some bad guys from doing some bad stuff.  The most memorable thing about the story unfortunately is the designers’ constant pop culture references to movies and video games, which at best got an eye roll out of me, and at worst pulled me out of the experience.  Some of these are just throwaway lines, but some of these pop culture references end up being major characters in the storyline.

The story paragraphs are in their own separate book from the scenario book, which is a nice touch, as it allows for surprises as you play through a scenario for the first time.  You may know opening a door will trigger reading a paragraph in the Book of Secrets, but you won’t know if it’s a good or bad thing that occurs until you do it (no accidental peeking ahead as can happen in other dungeon crawlers’ scenario books).  The Book of Secrets also allows for more “choose your own adventure”-esque narrative moments in the story, such as asking NPC’s questions, visiting locations in a village, making story decisions, etc. 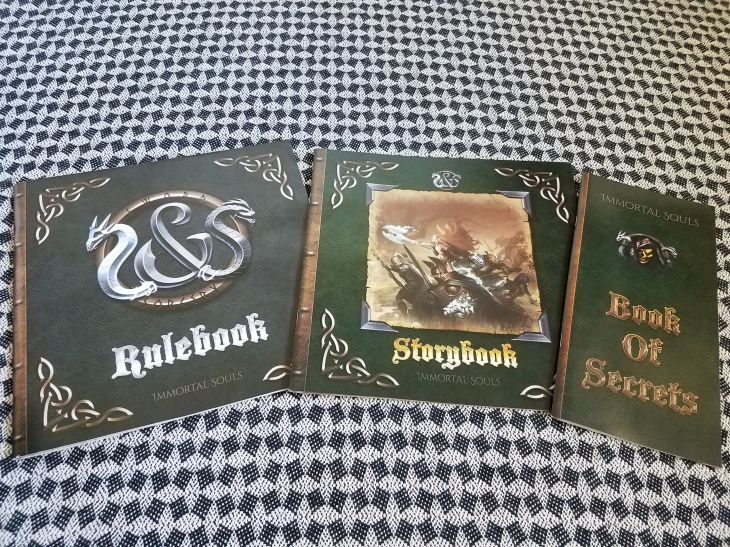 Over the course of the campaign, your characters will gain soul shards (XP) that will allow you to level up and gain new abilities, allowing you to not only get more powerful but also customize your character further.  In the base game and Arcane Portal, you can level up to Level 4, in Darkness Falls up to Level 7.  Each level gets exponentially more expensive to level up to, so while going from Level 1 to 2 costs 4 soul shards, Level 6 to 7 will cost 49.  As mentioned before, you lose a level when you die, so it gets progressively more and more expensive to die in the game, and can be frustrating to see a lot of time and effort killing monsters lost.  I’ve had sessions where even if I won the scenario, I ended up losing more levels/shards than what I started with, Even though I was progressing through the story I felt like I was making negative progress with my characters. 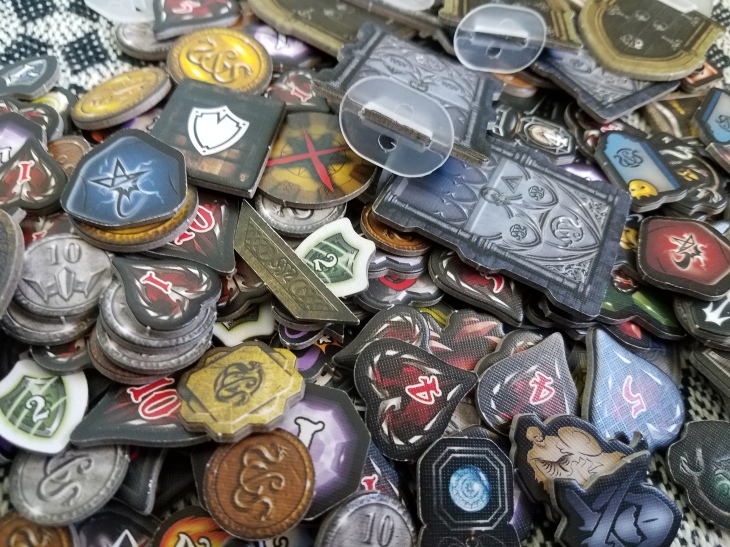 Mechanically, this is a solid dungeon crawling experience.  The enemy AI is streamlined, yet intelligent.  Scenario design is varied and challenging.  Player character classes feel different from one another, and the differentiation between good and evil versions is a nice touch.  But having played through the full base game campaign and half of Arcane Portal (8 scenarios in all), I don’t think I’m going to be continuing any further into the campaign.  Between the amount of time it takes to setup and play through a scenario and the sheer volume of things you have to track (especially as a solo player controlling multiple characters), it just didn’t really feel like the game was giving me that amazing of an experience back in return, just an OK one.