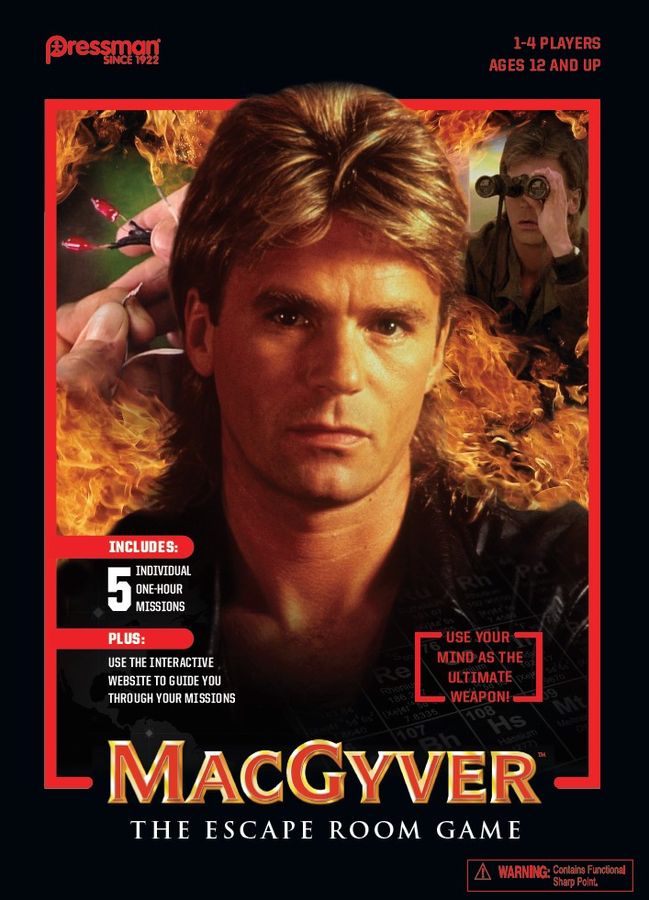 NOT SURE IF THEY WERE INTENTIONALLY TRYING TO MAKE IT LOOK LIKE A GAME FROM THE 80’S/90’S, BUT THEY NAILED IT.

I’m a huge fan of “escape room in a box” style games, and I have played pretty much every one that has been released to date.  When I heard that there was a Target-exclusive MacGyver-themed escape room game, I was morbidly curious.  Mass-market games based on IPs usually aren’t great.  Furthermore, it was designed by the same duo that made ThinkFun’s two “Escape the Room” games, which I wasn’t a fan of.  But my curiosity got the best of me and I bought it upon reading that the game came with five separate missions that had to be played in order, leading up to a grande finale against Murdoc.  A campaign escape room game?  I gotta try that out!

“Campaign” is overselling what the game offers (note: the game does not advertise itself as a campaign game).  Each of the five missions must be played in order because some components unlocked in earlier missions are reused in later missions.  There is no overarching storyline that carries through the five missions, it felt more like just five random episodes of the series.  In fact, the first mission is based on the pilot episode of the series, I’m not sure if any of the other missions are based on actual episodes or not.  Aside from a few physical props carrying over from game to game, nothing about your performance in previous games will affect future games.

Each mission consists of six puzzles that you must complete in a fixed order.  I found for the most part the puzzles weren’t that challenging to solve.  The majority of them were actual puzzles where you had to arrange some tiles in a certain arrangement, and required little thought aside from just moving pieces around until you reached the solution.  Some were a little trickier, some were a bit obtuse even with the hint system, but none of them ever made me say to myself “that was really clever” like other escape room games and actual escape room games have me do.  Even worse, none of the puzzle felt like stuff MacGyver would do to solve problems.  Instead of combining items together to make gadgets to solve problems like MacGyver would, you’re just trying to solve codes to enter into an a webform.  I admittedly am not a die-hard MacGyver junkie, so I can’t speak for how frequently MacGyver spent solving codes on the show, but it feels like he’s much more iconic for his DIY skills, and the fact that the game failed to capture that essence of the character and the show in the game is a huge misstep.

I should point out that the game requires an internet connection to use a website that serves as your game timer, hint system, and how you enter answers to the puzzles.  The website will also instruct you on what envelopes to unseal as you progress through a mission.  I’ve played a couple escape room games now that use apps and websites for similar purposes, so I had no issues with it, but just something to keep in mind if you’re looking for a purely analog experience or won’t have an internet connection.

I should also point out that in the envelope for the first mission, you are provided with a small mirror.  This mirror has a protective film cover on it that you need to peel off, I didn’t realize this until the final mission of the game and struggled using an incredibly cloudy mirror to try to solve puzzles with.  While I don’t think this knowledge would have noticeably improved my overall impressions of the game, it would have at least made solving a couple of the puzzles a little more bearable.

Unless you are a die-hard escape room junkie or an even bigger MacGyver fan, I recommend passing on this.  There are dozens of far better escape room tabletop games out there to try out.  If you want to combine items together to solve problems ala an old school adventure game, try checking out the Unlock! series.  If you want more a collection of challenging and interesting puzzles to solve, check out the EXIT series.  They are both fantastic and even the most mediocre entry in those series is better than any of the missions contained in the MacGyver box.