“When Stacey and the rest of the Spy Club go on a camping trip at their neighbor’s spooky cabin, they awaken to scary messages written in blood on the walls!  Wait, that’s not blood, it’s lipstick.  Is the cabin haunted, or is somebody else behind this bullying from beyond the grave?” – Back of the book of my theoretical Spy Club story

Turns out that it was the neighbor herself all along who was bullying the kids; she was jealous that she couldn’t be part of Spy Club!   Or at least this was the story that unfolded in my head during my campaign, and is one of 18,000+ unique combinations that can play out in a Spy Club campaign.

The master case of my Spy Club campaign, I scored 91/100 points.

Spy Club is a family-weight co-operative Mosaic (more on that later) campaign game that is an homage to the “kid mysteries” book genre (Nancy Drew, The Hardy Boys, Babysitters’ Club Mysteries, etc).  Players take on the role of a group of kids that form a neighborhood spy club to solve local cases.  Over the course of a game, you need to solve a case by determining the five major aspects of it:  the crime that was committed, the suspect, the motive, the location of the crime, and an object involved in the crime.  The artwork of the game by Bartlomiej Kordowski is evocative of a pre-teen mystery book, richly detailed, and very lovely to look at. 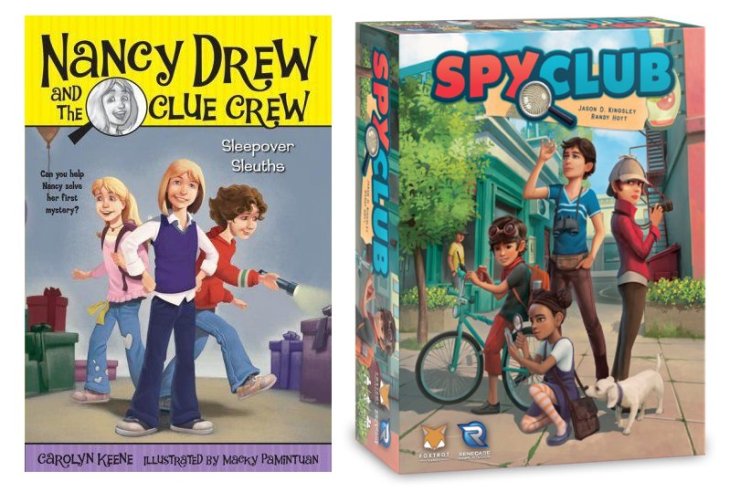 Spy Club’s artwork nails the source material it is based on.

Despite the detective theming, Spy Club is not a deduction or mystery game, but instead a hand-management and set-collection game. Players each have a hand of 3-4 cards that come in six different colors (five colors associated with each of the five aspects of the case, and a sixth grey “distraction” category that typically junks up your hand), and are working together to collect 5 cards of the same color in the middle of the table, solving one of the five aspects of the case.  When players have solved all 5 aspects by collecting a set of cards for each of the 5 colors, they win the game. 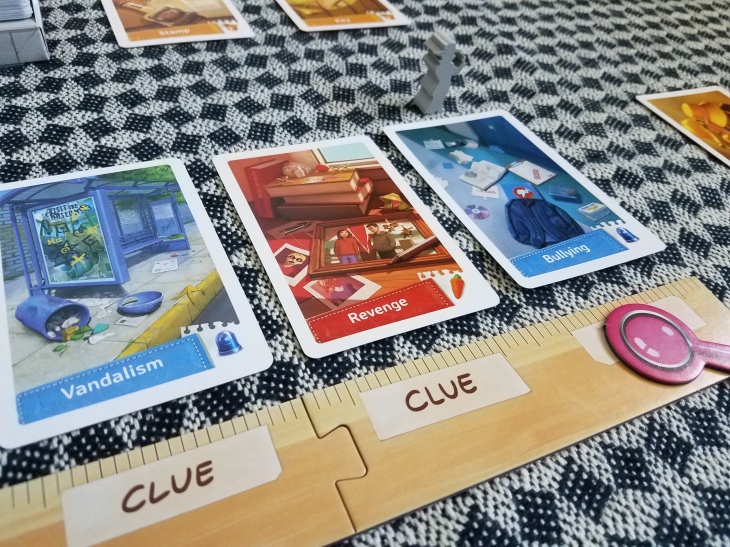 A player’s “hand” in Spy Club

The game follows the tried and true co-op turn structure of “player gets X actions, then the game does some bad stuff”.  Players are given 3 actions a turn to manipulate their hand of cards and commit cards to the middle, possibly getting bonus actions if they can synergize with other players.  A suspect pawn then moves around the table, performing various bad actions depending on the type of card it lands on.  I won’t go over the rules in extensive detail, The Game Boy Geek has an officially sponsored rules tutorial on his YouTube channel, or you can download the rulebook.  Games are quick and streamlined.  The rules are simple and you can easily play a game in 45 minutes even at a full player count.   Spy Club doesn’t offer an official solo variant, but you can control 2 players’ hands solitaire.  Playing as 2 characters doubles the amount of cards a single player needs to track, and there is a memory element to this game of remembering what is on the backside of each clue card, but it is manageable.

As a standalone game, Spy Club is perfectly functional, and even a bit challenging (I only won 2 out of my 5 plays of the game), but not particularly interesting.   You can really only collect one set of cards at a time in the middle of the table, so if you have cards of that color to contribute it’s a no-brainer what to do, and if not there’s not much else you really can do.  If Spy Club’s core game had been sold on its own as a standalone game, it would be just be one of the dozens (hundreds?) of forgettable card games that come out every year.  But Spy Club isn’t just a simple card game, it’s got a whole lot more going for it that make it go from being an average game to a great game, specifically its exciting and innovative Mosaic format campaign system.

“Mosaic format” is a term coined by Foxtrot Games to define a type of campaign that is fully resetable with no permanent modification of components, you only unlock a small portion of the the game’s content over a single campaign, and you can play the campaign multiple times with each being a unique experience.  Spy Club is the first in what I’m hoping ends up being a continuing line of Mosaic games by Foxtrot/Renegade.

Spy Club’s campaign is 5 games long, with the first game playing largely like the base game (who knows, maybe there’s a little twist in it…).  At the end of the game, whether you win or lose, you pick one of the aspects’ clues you were able to solve, and unlock the module associated with that clue.  Each of the 39 different clues in the game has its own unique module, consisting of a small subset of cards pulled out of a 174-card campaign deck (similar to Charterstone, for those that have played it).  These modules can introduce new rules, win/loss conditions, scoring opportunities, player powers, actions, and mini-games.  Since you only unlock 4 of these 39 modules over the course of a campaign, by my calculations there are over 18,000 unique combinations of modules, causing no two campaigns to be the same.  Likewise, it would take a group 10 full campaigns (50 games) at a minimum to experience all the content in this game.

Fans of opening sealed content in legacy games or revealing haunts in Betrayal at House on the Hill will experience a similar dopamine rush every time a new piece of content is introduced to the game.  I’ve only seen 4 modules myself, and I won’t spoil anything about them but they all felt unique from one another and took the game in different directions.  Individual mosaic modules that I experienced were typically only used in a single game and then returned to the campaign deck, so keeping track of new rules remained manageable through the entire campaign.  New content unlocked in a module was usually contained to a card or two of rules text, and a few cards and related tokens. 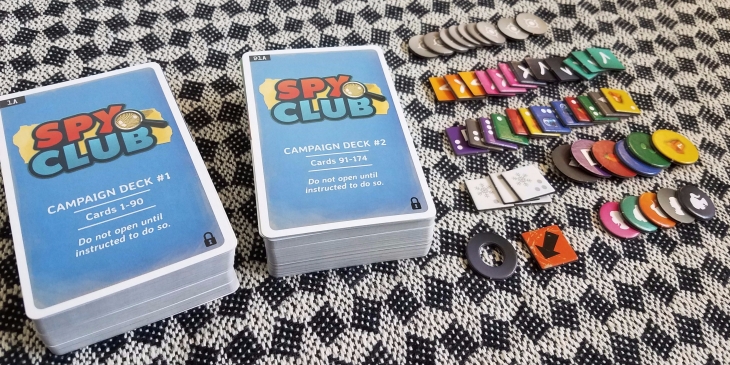 The full 174-card campaign deck along with assorted tokens that may get used by modules.

I want to give major kudos to Foxtrot Games for also having a comprehensive rules FAQ page online for each individual module in the game.  I think I only had one minor rule question in my entire campaign about a specific module, but I was impressed by how thorough the FAQ just for that single module was.  I know how frustrating rules ambiguities can be in campaign games and not wanting rules mistakes to be compounded from game to game, so I really appreciate the amount of effort Foxtrot put up front to make this game as smooth of an experience as possible.

Given the variability of what can unlock, the campaign doesn’t have a fixed storyline.  The modules have some flavor text associated to them as to why they’re being introduced to the game, which I found didn’t always necessarily correlate to the clue card that unlocked it.  Players are encouraged to discuss among themselves how the various solved aspects come together to tell a story, and players can share their stories on the official Spy Club website.  The game is very flexible in allowing players to come and go between games.  Players can skip games or leave a campaign without any detriment to the group as a whole, and players who join midway wouldn’t be at a disadvantage or feel like they missed out on key story beats.

I think Spy Club is an excellent family-weight intro to campaign gaming.  I plan on holding onto my copy for when my daughter is older, and this very well may be the first campaign game we ever play together.  Spy Club manages to scratch a similar itch to opening a sealed packet in a legacy game, without the commitment of a 12+ game campaign or the overhead of a more complex ruleset.  Players looking for a deeper campaign experience may want to look elsewhere, but Spy Club will be a good fit for younger gamers, families, and game groups that want to play through a shorter campaign game (this would be a perfect choice to take on a vacation or weekend trip).  I think that Foxtrot/Renegade have a hit idea on their hands with the Mosaic format, and I can’t wait to see where they or other designers go next with it.